Over the past three years my doctoral student, Johan Pretorius, has been busy measuring the ecological services (i.e., benefits) provided by some of the insects commonly found roaming on the ground in sugar beet fields. We are working on sugar beet because the Western Sugar Cooperative has been very supportive of this work and it is a vital commodity for producers in western Nebraska. This work could (and hopefully will) be done in other crop settings and systems, but this is where we have started. Through our experiments and sampling, we have found that ground beetles (Carabidae) are the most prevalent group of arthropods within these western-Nebraska systems (sugar beets following maize). Other researchers have had similar observations with ground beetles being highly abundant in their agricultural systems as well. We have found about 40 species that reside in our sugar beets fields! The reason this is a very interesting and exciting find is that in recent years researchers have found that many ground beetle species provide a number of benefits to agricultural systems (if properly managed). All of these species have various micro-habitat, seasonality, and food preferences. Some species are strict seed feeders while others are voracious carnivores. This raises a couple questions: What are they doing in beet fields? How might their number be encouraged?

Some ground beetle are generalist predators and will feed on other ground beetles. It's thought that agricultural ground with higher residue (like sugar beet fields with minimum tillage following a maize crop from the previous year) provide greater habitat and shelter for more ground beetle species. That is, some of the smaller ground beetles that might otherwise be fed on by the larger predators have a place to hide. This, in turn, might free up time for those generalist predators to attack other insects (e.g., pest insects). At least, that could be one hypothesis. Others suggest that reducing tillage conserves habitat within the soil for the larvae of these ground beetles (they larvae are also soil dwelling and less mobile than adults) and thus increases their numbers within a field. The two ideas are probably not mutually exclusive.
Part of our studies have been focused on how tillage influences ground beetle habitat. However, we have also been very interested in the functional ecology of this group. Through our studies, it turns out that these beetles eat some of our pests insects common to sugar beet (e.g., the sugar beet root aphid) as well as some of our most tough-to-control weeds (e.g. kochia, foxtail, lambsquarters, and baryard grass). The video shows one of our bioassay choice tests. The beetles in the petri dishes are being given a choice between the seed of the four above-mentioned weed species. In this video you can see Harpalus eraticus (labeled as HE) and Amara carinata (labeled as AC). Some of the beetles are clearly more actively moving that others. We found Harpalus eraticus to be a voracious seed feeder; a single individual consumes as many as 20 Kocia seeds in a 12-hour time period! A single Kocia seed can produce a plant that will in turn produce tens of thousands of seed. So, the impact potential of this one species might be huge! With our growing problems with herbicide-tolerant weeds, our understanding of the role of ground beetles in agriculture and what we might do to encourage their numbers seems of growing importance.
Posted by Jeff Bradshaw at 3:30 PM

Don't let the above happen to your wheat or alfalfa field!! As mentioned in last week's publication of CropWatch, four or more cutworms per square foot in an established field (or two or more in a new or stressed stand of wheat or alfalfa) can significantly reduce yield potential. The center image was the approximate number of army cutworms found per square foot in the field on the right. The field on the right is supposed to be a field of winter wheat. Where's the wheat!? Well, some of the seed blew out due to the extremely dry weather that we have had for months now. However, as you can see in the image on the far left, the wheat that did emerge is not being grazed on by the kind of livestock that you could sell. This field is a little too late to be saved. On the other hand, in the spirit of "making lemonade out of lemons", you could make wine. And, yes, these caterpillars will turn into 'miller moths', so there is, I think, a high potential for a large miller moth population this year.
Posted by Jeff Bradshaw at 10:04 AM 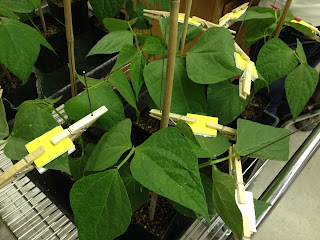 It has been a while since I've posted. We have been quite busy in the lab with a long list of projects as well as some laboratory renovation preparations. It has been a while since I've posted on our progress toward finding resistance to Mexican bean beetles in dry edible beans. We have made a lot of progress. We have tested beetle populations for two, presumably, divergent beetle populations and have found that certain varieties of pinto beans (and a couple other market classes) yield significantly lighter beetle larvae. The mass of an insect's larval stage over a measured period of time has been used in many bioassays as a measure for host suitability. Over a side-by-side comparison of treatments (different dry bean varieties in this case) we can measure the gain in larval mass over a set number of days and compare those weights across treatments. Lighter larvae are then assumed to be less fit and presumably (if the experiment is designed properly) there is some characteristic of the plant that caused the larvae from one variety to weigh less than another. As illustrated here, our bioassays to date have used a "detatched leaf method". This method allows us to test a large number of varieties at once. However, some plant defense compounds are known to be affected by different kinds of plant injury and some kinds of injury actually stimulate a delayed response that travels throughout the plant. Since we cut away the leaf material from the plant in our bioassays, we could be interfering with some important plant resistance mechanisms that may be expressed differently when you remove tissue from a plant. So the image on this page shows another kind of bioassay that we have just begun. In this bioassay we have designed small cages to contain the Mexican bean beetle larvae on leaves that are still attached to the plant. We are using the same varieties that we think represent the extremes of susceptibility and resistance to the beetles. We hope that this bioassay will agree with our cut-leaf bioassay, but we won't know for a few more days. Stay tuned for more....
Posted by Jeff Bradshaw at 11:45 AM

In recognition of the 2012 Bradshaw Entomology Lab... 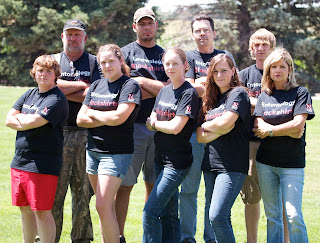 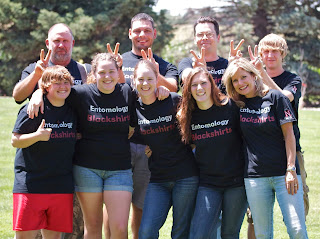 So, it has been another great summer in the lab with another great crew (pictured to the right is everyone but Sean and Kelli). Sure there is plenty of work left to do in order to finish out the season; however, about 1/3 of the lab will be left after most of them go back off to school next month. So, I took the opportunity to take a photo today. I got a bit carried away this year and designed t-shirts for the lab.

There is sort of a Nebraska story and tradition that explains the "entomology blackshirts" shirts that we are wearing. According to Wikipedia, "The Blackshirts are the first-string defensive unit players for the Nebraska Cornhuskers football team." The short of it is that Nebraska football coaches in the 1960s began giving out black shirts to their top defensive teams. It eventually became a tradition where players had to "earn" their black practice shirts and at some point the entire Nebraska football defensive line became popularly known (at least in Nebraska and to all Husker fans) as "Blackshirts". So I felt it apt to hand out my blackshirts about mid-season once the summer crew had earned them. You can see the shirt fronts in the photos. The symbol for the Husker Blackshirts is often a skull and crossbones. Therefore, obviously, the back of the shirts have a screen print of Acherontia lachesis (the death's head hawkmoth, of Silence of the Lambs fame). There are actually three species of Acherontia that are commonly known as death's head moths. However, Acherontia lachesis could be roughly translated from old Greek as "proportioner of pain" and I kind of like the ring of that. This may seem as a bit of an eccentric act; however, a well-rooted team needs a bit of mythology and I have got a rock-solid crew deserving of my gratitude. Go team!
Posted by Jeff Bradshaw at 9:15 PM

As indicated in a previous post, 2012 has been a boom year for wheat stem sawfly damage. I decided to put together a short video. I have had a few phone calls to the office inquiring about lodged wheat and some word-of-mouth chatter that would indicate that some wheat producers do not recognize wheat stem sawfly damage. It has been a windy year for a windy part of the country, so apparently a number of producers, understandably, are blaming their lodged wheat on the wind. Some are blaming the lodged wheat on the variety and suggesting that the variety that they planted had poor straw strength (or poorer than expected). This is only part of the story. Because the wheat stem sawfly girdles wheat tillers near the base late in the growing season, it often takes a bit of wind to knock the wheat down. When the wheat finally does fall, it often does so in dramatic fashion. The video is a bit of a crude "Duke Dukem" style view of sawfly damage, but I think it gets the point across.
Posted by Jeff Bradshaw at 11:39 AM

An undergraduate in my lab developing a device to carry cow dung samples. That's right dung samples. She is working on a project that explores the attraction of dung beetles to various "qualities" of cow dung. She needed a better way of transporting her bait into the field. I've been telling my students this summer that they have unofficial minors in arts & crafts. 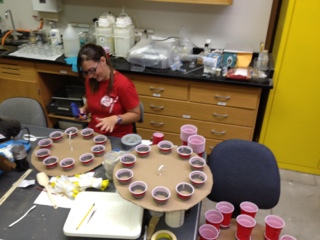 Posted by Jeff Bradshaw at 7:16 PM

Time to harvest wheat in the PREC entomology lab. Wheat harvest is perhaps three weeks early this year. It has been a warm year! Riley (undergrad student in the foreground) and Susan (lab tech with a face full of wheat in the background) are hauling in some stems that we will split to evaluate the presence of wheat stem sawflies. 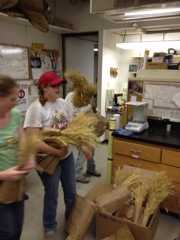 Posted by Jeff Bradshaw at 3:58 PM

Jeff Bradshaw
I am an Associate Professor of Entomology at the University of Nebraska. I work at the Panhandle Research and Extension Center. 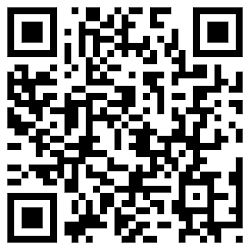 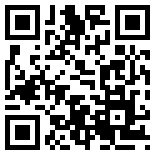 QR code for UNL's CropWatch. Just scan it with your smartphone to have it take you to CropWatch. If you are on your computer, just click the image.